Apple has become known for its iconic skeuomorphic designs in its iOS user interfaces.

The debate over flat vs. skeuomorphic design may soon be coming to an end – at least for the foreseeable future as Apple appears poised to sideline their highly successful skeuomorphic iOS design aesthetic in favor of a more flat design in their upcoming release of iOS 7.

While their iconic skeuomorphic user interface has captivated the world since the first iPhone, it appears as though Apple is shifting to an aesthetic that’s closer to its fiercest competitor, Microsoft. Microsoft’s Metro UI has seen a favorable response in the design community and it appears as though Windows 8 has been a driving force towards the acceptance of flat design. Designers are picking up on the simplicity, beauty and function of flat design and once Apple embraces it, there is likely to be no turning back.

At this point, you might be wondering, “what is skeuomorphic design?” Essentially, skeuomorphic design seeks to emulate real life through design. Skeuomorphic designs borrow features from the past, even when the need for them no longer exists. For example, when you take a picture on a smartphone, it makes a shutter noise which clearly is not necessary. It does, however, add to the realistic feel of the picture-taking process on the smartphone. Another example is the torn paper, metal rings and leather texture on calendar apps. While these design elements give the designs familiarity and a certain degree of intuitiveness, they can also quickly become kitschy.

Apple has clearly struck the right balance with their skeuomorphic designs in the past. However, with the successful introduction of the simple, modern looking Metro UI by Microsoft, the tide appears to be turning. Many are now speculating that Apple will introduce a flatter design when they release iOS 7.

Flat design cuts the ties with the non-digital world and focuses on the functionality that comes from simple design. A great example of flat design is the screen of the Windows Phone 8. As screen resolutions have improved with advances in technology, many designers feel that they can create stunning designs by focusing on typography and colors. For example, Microsoft’s Metro UI uses flat blocks of color accentuated by gorgeous, large typography. 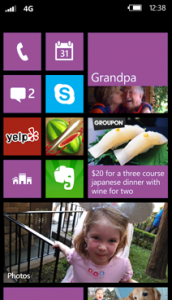 The simple, flat design of a Windows Phone 8 screen.

While flat design is modern and forces designers to focus on both design and function, it does pose the risk of designers taking the concept of simplicity too far. When taken too far, flat designs could actually become less intuitive. Without textures and realistic elements, a severely minimalistic flat design may make it difficult to tell what elements are used for navigation.

Therefore, going forward, designers are going to have to achieve just the right balance between flat and skeuomorphic design. With Apple on the brink of integrating flat design into their enormously popular iOS UI, it will be important to look at how they achieve that balance.

As a result, you may want to consider working with your web designer to redesign your website so it is positioned for success in the ever-changing design landscape. It doesn’t take long for user preferences to change and suddenly you’ll find that your website is looking clumsy and outdated. In order to connect with your customers, you need a modern looking website design.

What our clients are saying

I want to thank you for your help with our website development project. Your programming skills, attention to detail, and ability to interact directly with our client were excellent. You have provided tremendous value to my organization. With a project of this magnitude, including the use of web services to push data out to 19 sub-websites, your ability to overcome our unique challenges and coordinate with my IT team was exceptional. I appreciate your help, and I am certain that your expertise was key to the project's success. Thanks again, I look forward to working with you on our next endeavor!